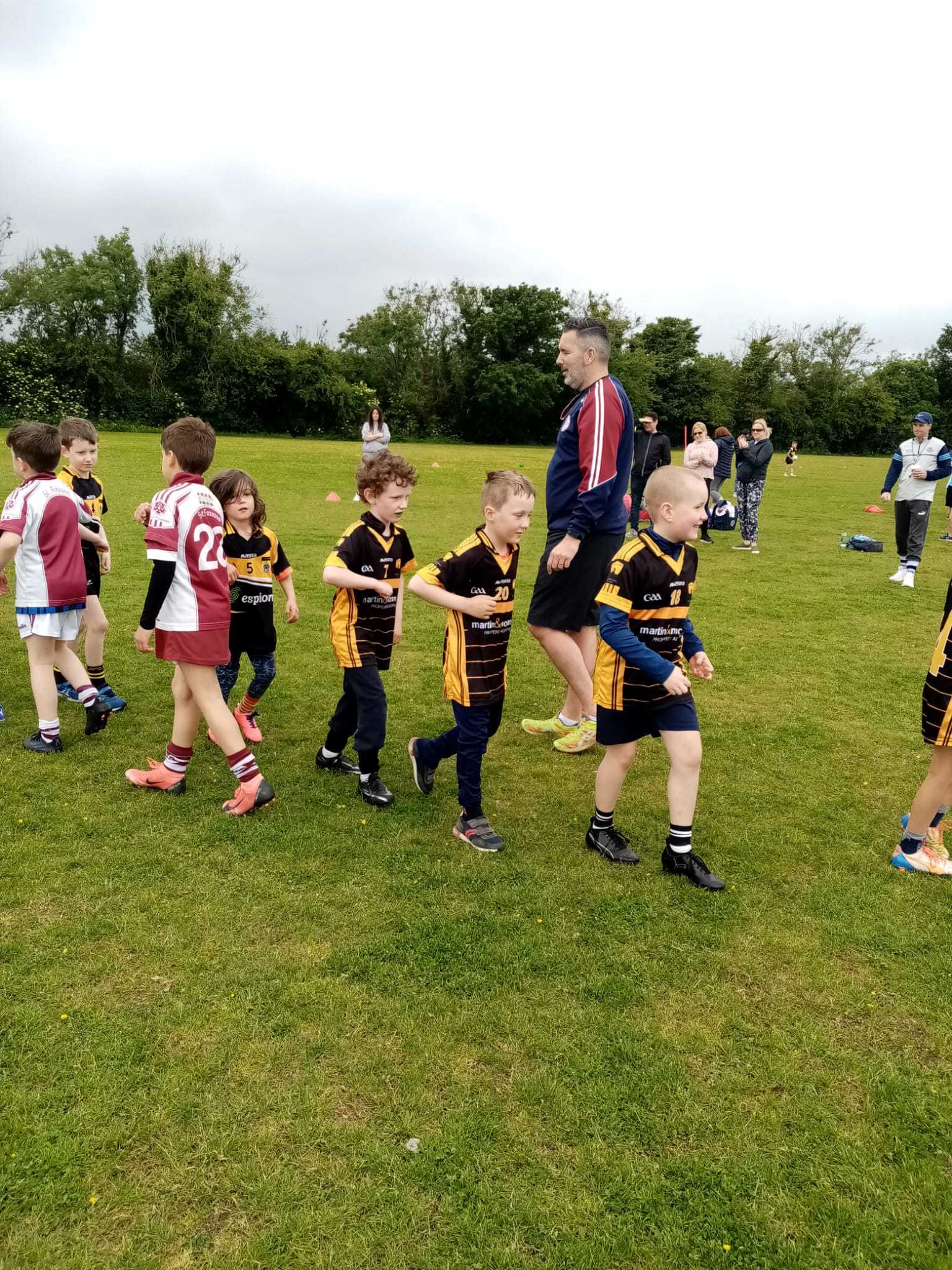 Published: about 2 months ago

It was a busy weekend for kids, parents and coaches as the boys headed out to St Finians in River Valley, Swords and the girls were at home to a double header with Erins Isle and Crumlin.

Saturday morning saw the boys in the beautiful environs of River Valley. We had a great turn out with 14 or so lads pulling on the black and amber jerseys. Tony managed one team and Luke the other with lots of support from the parents. The word seems to have got out about the quality of our lads as Oscar Macs granny travelled up from the sunny south east of Wexford to watch her grandson in full flight. Luke gave his lads one of his now infamous team-talks got them into their positions and the ball was thrown in to roars of approval.

Luke’s charges did very well. They won their first game well and just shaded the second game too. We had a few more players than Finians so Luke rotated the players. Devin played very well in midfield. He has always been pretty fearless and his skills are coming on every week. Daniel continues to be described every week by parents as “the most improved player” overall which is great to see and hear. His relentlessness and determination are super. During the first match there was a massive shower of rain which we could have done without – in a flash back to 1970s old school parenting one of the parents (who shall remain nameless) shouted out “its only rain ye aren’t made of sugar”. Reminded me of my youth! One of our new lads Ervine is doing well already really fitting in. Under his dad’s supportive gaze Danny scored 2 or 3 goals showing a real instinct for finding the net. Leo did his usual maestro-like performance. I particularly recall one of the Finian’s kids zeroing in on goal and just as he was about to pull the trigger Leo stuck in a hand and knocked the ball away – impressive. Both Daragh and Gus made a good contribution. Daragh is one of the keenest kids in the gang and a great example for all. Maxo played very well – as ever calm under pressure.

Tony managed the other team and they put on a good show. Jamie is one of the bravest kids in the squad stopping shots from all angles. Crean and Oscar (who I was informed “must play together at all matches as they are best friends”) made up a great duo. I could see Oscar’s nana laughing away at the pair of them from her deck chair on the side-line. We may need to point out to them as they approach U-18 that they don’t need to just handpass to each other – but its great fun to watch now. Indeed, seeing any kids handpassing at age 7 is success! Tadgh and Oisín flew all over the pitch and Oisín got a great point and was very unlucky with one or two of his other shots. Daniel displayed great bravery sticking his head down on multiple occasions to pick up the ball during the melee. Parth did a super job in midfield and had tons of possession and has obviously mastered the handpass.

Finish The Summer In Style!

Only three weeks to go to our Annual Summer Camp, and spa...

Get the kids out playing before they go back to school!Th...

Less than one month to go to our Summer Camp! Guaranteed ...

Less than 4 days to go until the start of our Cul Camp! H...

Cúl camp gear looks great this year - and there are still...